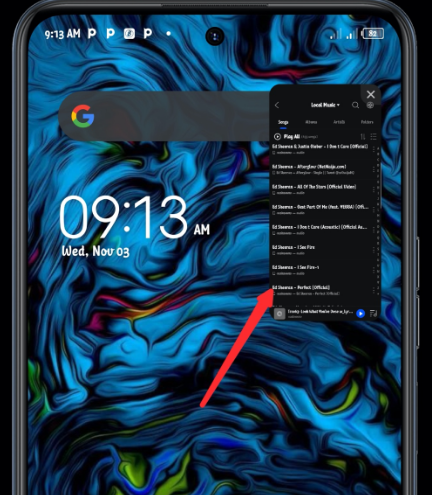 The majority will agree that there is literally no doubt that Android 11 based on HiOS 8.0.0 on CAMON 18 Premier has brought to life some really innovative features and polished more than a few bits and pieces of old features and one of such polished bits of feature is the Lighting Multi-Window Feature.

This feature is popular known as the “Floating Window” on other smartphones UI, while for recent smartphones running on Android 11, accessing this feature has been a herculean task. Fortunately the developers of HiOS 8.0.0 took their time to refine this feature to be seamless for it’s users to experience real multitasking.

HOW TO ACTIVATE AND USE LIGHTING MULTI-WINDOW FEATURE ON TECNO CAMON 18 PREMIER.

There are two (2) ways this feature can be activated:

✓ Once on an application main screen (we will be using Boomplay to site an example), swipe from the bottom up with three (3) fingers to to bring the app into a lighting Multi-Window, just as indicated by the red arrow in the caption below.

✓ If you are not comfortable with “swiping up from the bottom with three (3) fingers”, You can also access this feature seamlessly from your “Smart Panel”. Swipe from the edge of your screen and hold, till you see an “S” symbol just as indicated by the red arrow in the caption below.

✓ To exit an app from the lighting Multi-Window, simply tap on the app in the floating window, and tap on the “X” symbol located at the top right hand corner, just as indicated by the red arrow in the caption below.

✓ Better still you can drag the floating window app to the corner of your screen indicated by the red arrow in the caption below to exit the app from the Lighting Multi-Window.