The album drops on the 19th of July and we got you covered, as you can get it here firsthand.

See photo of tracklist and features below; 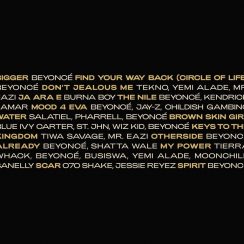