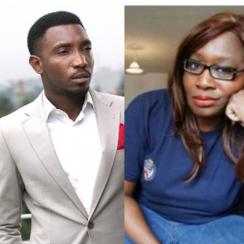 The musician said the N10m his wife demanded from Fatoyinbo as legal fees were nothing as he could make the sum in just one weekend of performing at shows.

Dakolo said this in an Instagram video on Tuesday. He said,

“Don’t mind stupid people. As I dey like this, na N10m be my problem? Nigerians please have sense before you comment. Before you tweet, ask questions. It will save you.

Dakolo’s wife was trending on Twitter on Monday following reports that she demanded that Fatoyinbo should pay N10m to cover her legal fees.

The photographer accused the COZA pastor of raping her 20 years ago.

However, Olunloyo has been one of the fiercest critics of the Dakolos.

The blogger has been accusing the Dakolos of extortion and telling lies against Fatoyinbo for several months.

Olunloyo, who is the daughter of a former Governor of the old Oyo State, has been known to attack several celebrities and important personalities. Left for me I’d say she is just a bitter woman, but who am I?